Inspired by illuminated manuscripts of the Renaissance, Rosemarie Forsythe's work celebrates nature and the power of ideas through symbols and math/science equations.  She uses acrylics, gouache, flashe, gold leaf, and mica chips on paper, canvas, or board.  ​

The Hidden Universe by Rosemarie Forsythe, acrylic on canvas, 30”x40”  If you look closely, you can see another universe in the shadows (which involved painting complex and detailed patterns in the background). The equations in the ornaments are 17 equations that changed the world along with the equations related to cycler orbits to Mars. Many symbols of wisdom, knowledge and leadership are embedded throughout the ornaments and the alternate universe in the shadows.

​To see more of Rosemarie Forsythe's equation paintings, click the link above.

To see more of Rosemarie Forsythe's figurative paintings, click on the link above. 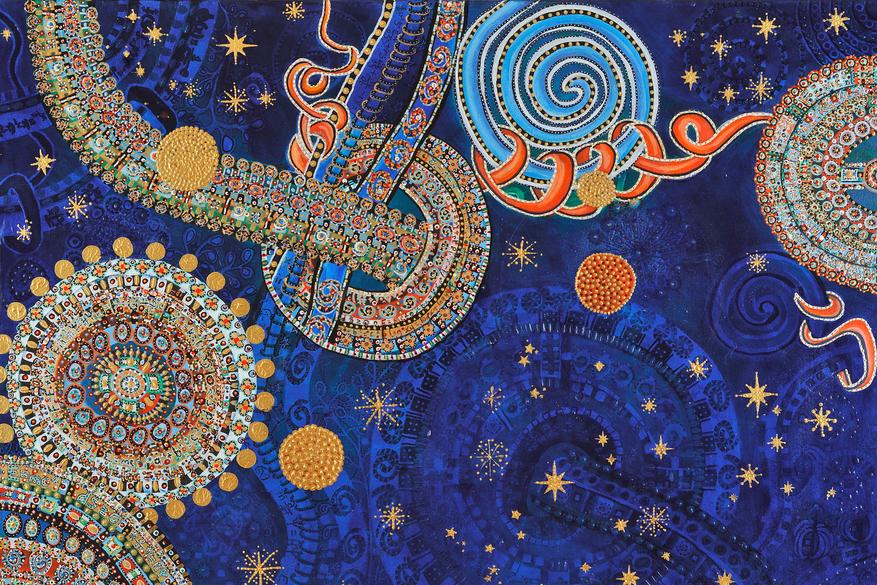 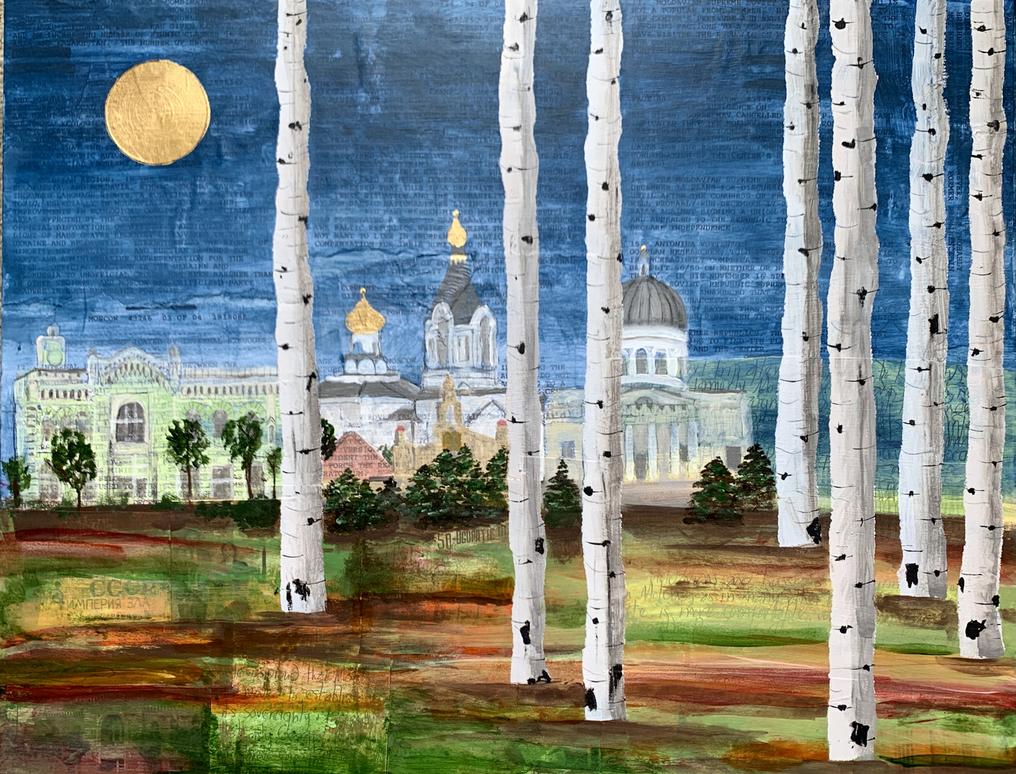 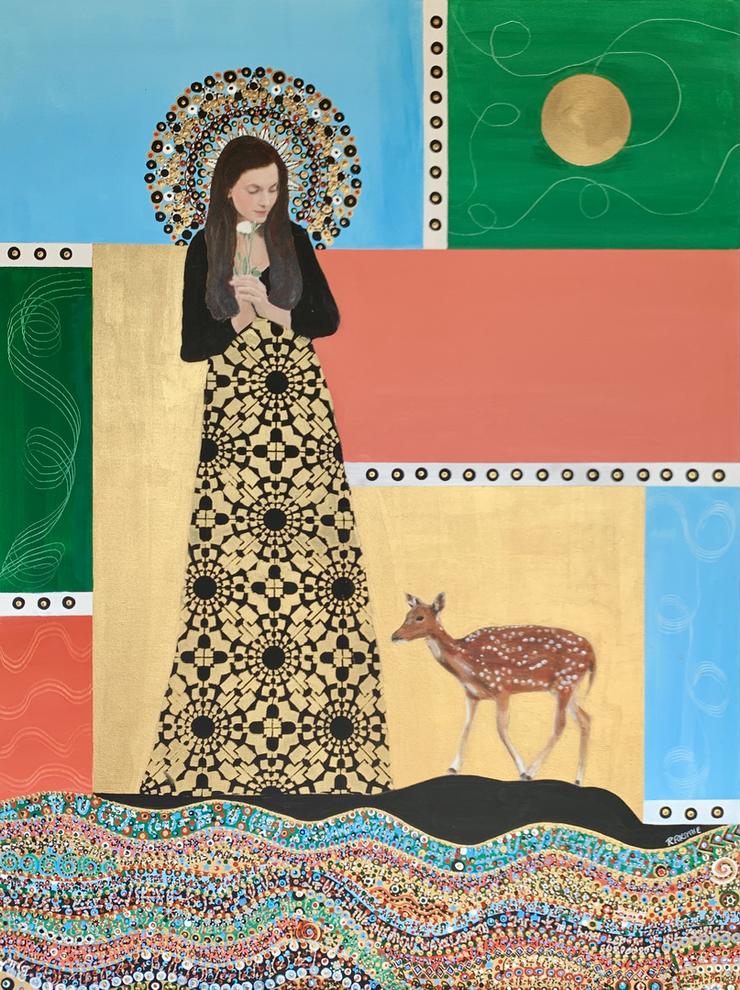 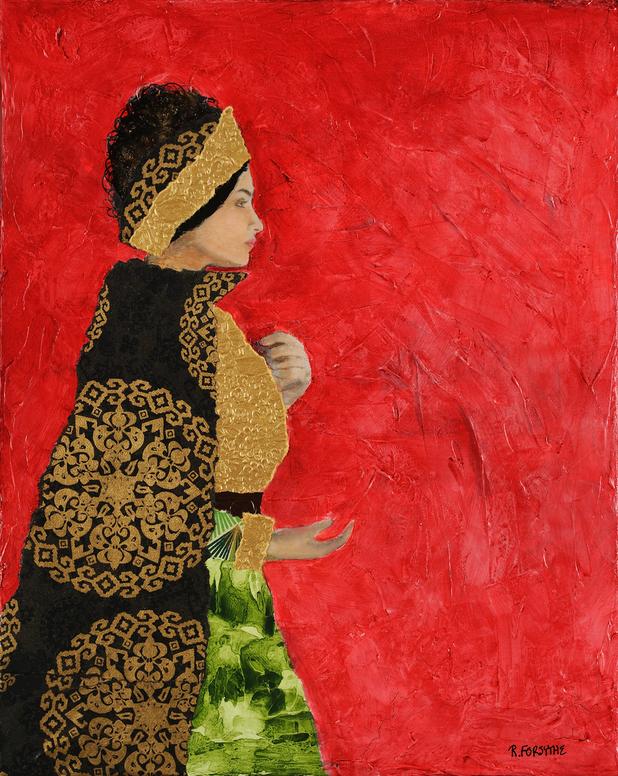 Above: "Meditations" by Rosemarie Forsythe, 40”x30” acrylic on canvas.  Along the bottom are symbols for knowledge and learning plus equations from mathematician and famous WWII codebreaker Alan Turing’s last scientific paper, “On the Chemical Basis of Morphogenesis.” The 1952 paper describes how animals such as deer develop their spots.  The paper was ignored by biologists for three decades until the rise of powerful computers and modern molecular cell biology were able to prove Turing’s theory.

​To see more of Rosemarie Forsythe's symbol paintings, click on the link above.

"Empire Twilight:  Moldova" by Rosemarie Forsythe, 16"x20" Mixed media on board.  The background of this painting is made of my declassified diplomatic reporting cables from the final years of the Soviet Union.  I was a US diplomat posted in Moscow and sending back accounts of the tumultuous end of an empire.  I traveled across the 11 time zones and 15 Republics of the country, talking to Republic Presidents, opposition groups, authors of independence declarations, dissidents, young people, and scholars.  I spent a lot of time talking to officials who were trying to draft the Union Treaty to keep the USSR intact and to Republic leaders who were testing the limits of sovereignty.  It took seven years to get the reporting cables declassified through FOIA, and I’m using them as backgrounds for this series. SOLD

To see more of Rosemarie Forsythe's Empire Twilight Series, click the link above.