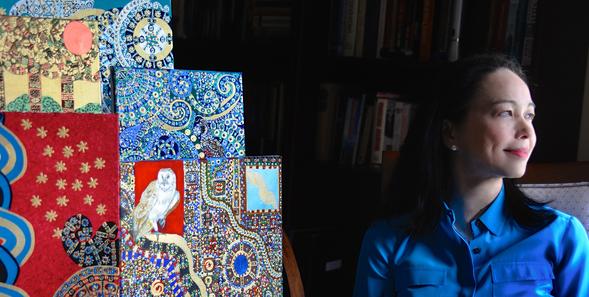 Inspired by living and working around the world, Rosemarie Forsythe paints in a style she calls "conceptual illuminations.”  Her paintings celebrate the power of ideas that have influenced the course of history or changed the way we think about the world.

Rosemarie paints in a fine art style reminiscent of centuries-old illuminated manuscripts.  Instead of words, she embeds symbols, math/science equations, algorithms, ornaments, and/or intellectual puzzles in her modern art.  She uses acrylics, gouache, flashe, gold leaf, mica chips, and/or handmade paper to render symbols, math/physics equations, algorithms, and intellectual puzzles in jewel-like paintings. Her style mixes matte gem tones with metallics to achieve a look reminiscent of Byzantine icons or 15th century illuminated manuscripts.  Her paintings are rich in texture and include matte colors illuminated with gold or silver.  Deep, bright jewel-tones are layered in intricate patterns to look like ornaments made of precious gems.

Rosemarie also has done a memoir in paint called "Empire Twilight."  These paintings include photos and texts from her officially declassified diplomatic reporting cables from the end of the Soviet Union (1989-91).

Before she became a full-time artist, Rosemarie lived in seven countries and visited over 60 countries in the course of her past careers as a U.S. diplomat, policymaker, and international business executive.  Trained as a professional jeweler in her years abroad, she eventually combined her jewelry designs with her intellectual and prior work interests to create a unique style of painting.

Rosemarie’s works are in private collections in Qatar, Switzerland, Belgium, France, the UK, and the US.  She has had commissions for work in the south of France, Washington, DC, and New York.