“Quartet” 16”x20” acrylic on canvas.  Features the work of four accomplished scientists who overcame the biases of their times to achieve celebrated accomplishments:  Lise Meitner, Esther Lederberg, Ida Tacke, and Rosalind Franklin.  I embedded equations, the names of awards and prizes, and symbols related to their work in these gowns.  The figures wear masks as the women’s accomplishments were hidden or suppressed at various times.

On the far left figure I embedded Lise Meitner’s discoveries, including two elements from the Periodic table and the many prizes she was awarded in the cloak on this figure.  She should have been awarded the Nobel Prize in 1944 for her work on nuclear fission with Otto Hahn — as scientists discovered after the Nobel records were unsealed decades later.

Moving to the right, the figure in blue references the work of Esther Lederberg who was an “American microbiologist and a pioneer of bacterial genetics.  Her contributions laid the foundation for much of the genetics work done in the latter half of the twentieth century. Notable contributions include the discovery of the bacterial virus λ, the transfer of genes between bacteria by specialized transduction, the development of replica plating,and the discovery of the bacterial fertility factor F (F plasmid).” I embedded references to all these things under the white dots.  You can see the lambdas running in a stripe down the front.  She faced a fair amount of discrimination as a female scientist at Stanford, particularly during the 1950s and 60s.

​The next figure (in red, pink and green) celebrates the work of Ida Noddack (25 February 1896 – 24 September 1978).  Noddack née Tacke, was a German chemist and physicist. In 1934 she was the first to mention the idea later named nuclear fission.[3] With her husband Walter Noddack and Otto Berg she discovered element 75, rhenium. She was nominated three times for the Nobel Prize in Chemistry and received many other prizes and awards for her work.  I put the names of the two elements she discovered along with various prizes she won for her groundbreaking work in chemistry.

​The final figure on the far right includes references to Rosalind Elsie Franklin, who was an English chemist and X-ray crystallographer whose work was central to the understanding of the molecular structures of DNA, RNA, viruses, coal, and graphite.  Crick and Watson, who won the Nobel Prize for their work on DNA used Franklin’s data but did not acknowledge her contribution until much later and even then, grudgingly.  I put Watson and Crick’s names under her feet.  😉  I also included the double helix, some of the many prizes and honors she won, and symbols related to her work.

ON EXHIBIT IN BOLIVIA

“Three Wise Women” — celebrates the work of three female scientists who created pathbreaking technologies, despite the prejudices of their time.  Embedded in the ball gown on the left are equations from Hertha Ayrton’s papers on energy in the early 20th century.  A man presented her first paper on the subject to the Royal Society as women were not allowed.  The Royal Society eventually gave her membership and its highest honor for her groundbreaking work.  Stephanie Kwolek’s chemical formula for kevlar adorns the middle gown.  On gown on the right are the date and patent number of Hedy Lamarr’s  invention — a communications system that would lead to technologies such as wi-fi, bluetooth, and GPS.  I included the celtic spiral throughout — a symbol of the expansion of knowledge and female power. SOLD 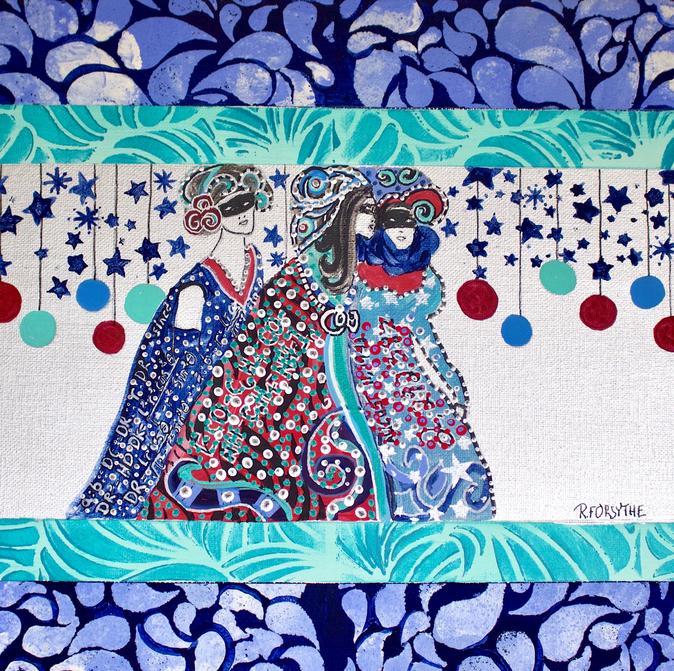 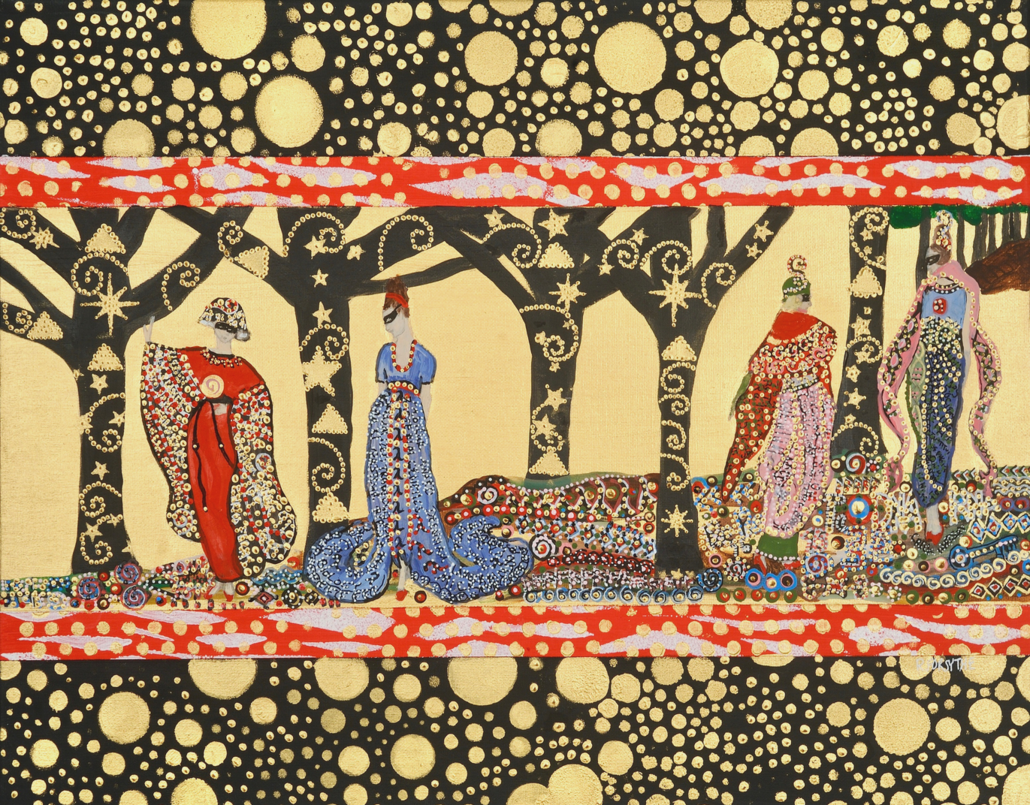 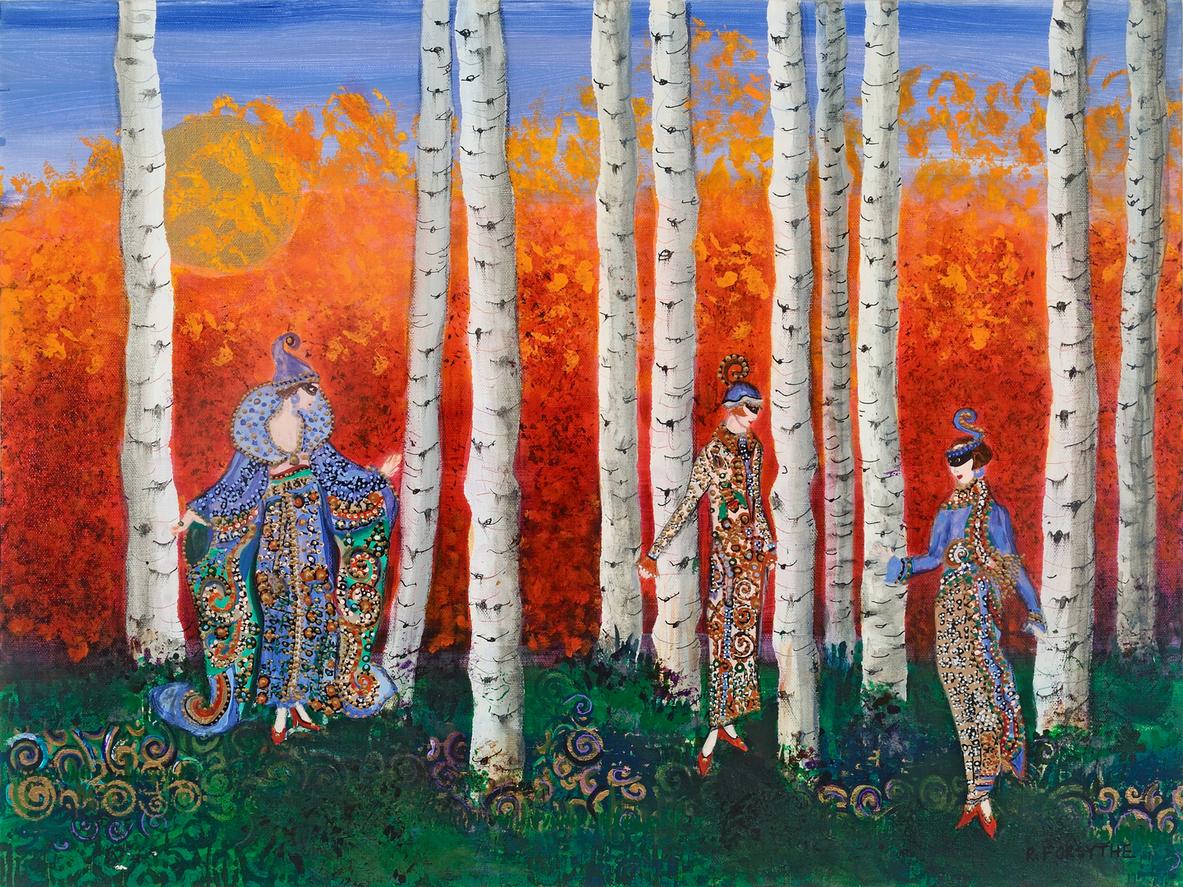 “Ternion” celebrates the work of accomplished scientists who made important, groundbreaking discoveries despite their struggles to be heard.  All three had to work without pay or for little pay mainly because of their gender.  The figures wear masks because these scientists were often pushed aside and not recognized for their abilities until late in their careers.  The sunset refers to recognition deferred until late in their lives.  Birch trees  are symbols of determination and resilience.

The figure on the left highlights the work of mathematician Emmy Noether (1882-1935). A larger than life person, she made many groundbreaking contributions to the fields of abstract algebra and theoretical physics.  Her theorem is generally described as “the backbone on which all of modern physics is built.” Her work significantly influenced classical and quantum mechanics.  Noether had to work for seven years without pay and had to teach under a male colleague’s name because her university did not appoint women professors.  Around the time Noether finally received global recognition, the Nazi regime dismissed Jews from their university positions, and Noether fled to the United States.  This figure features equations from Noether’s work throughout along with other references to her work.

The figure in the middle features the work of Nettie Stevens (1861-1912), an American Geneticist.  Stevens discovered that  sex is determined by a particular configuration of chromosomes.  She successfully expanded the fields of genetics, embryology and cytogenetics (the study of DNA structure within the cell nucleus). Although Stevens presented her findings in 1905, her work was not fully recognized until several years later.  Although Stevens made her groundbreaking discovery at age 44, she was not offered a long-desired Professorship (at Bryn Mawr) until just before her death at age 50.  The figure includes X and Y chromosomes along the sleeves and collar along with the meal worms, a fruit fly, beetle and butterfly — all subjects of her various experiments.

The figure on the right celebrates the work of theoretical physicist Maria Goeppert Mayer (1906-1972), who received the Nobel Prize in 1963 and solved one of the great mysteries of the universe — how isotopes behave.  She developed a mathematical model for the structure of nuclear shells and explained why certain numbers of nucleons in an atomic nucleus result in particularly stable configurations (the so-called “magic” numbers 2, 8, 20, 28, 50, 82, 126). When Mayer wrote her doctoral thesis on two-photon absorption in 1930, her theory could not be verified experimentally.  With the invention of lasers, however, it was verified in 1961.  Mayer was not able to get a paid professional position until eleven years after her groundbreaking thesis and, even then, it was a part-time position teaching at Sarah Lawrence College in 1941.  In the meantime, she had worked for free or as a secretary.  Finally, in 1960, after working on the Manhattan Project, Los Alamos, and Argonne National Laboratory, she was appointed a full Professor of Physics at the University of California, San Diego.  Applications of her two-photon absorption discovery include 3-D printing, cancer treatments using photodynamic therapy, 3-D optical data storage (with terabyte-level data capacity, among many others.  Embedded in the figure are various equations related to Mayer’s work, the magic numbers, an onion (used to describe a pattern in her work), and other references to her achievements.

ON EXHIBIT IN BOLIVIA